What’s more, we are helping other groups to set up there own schemes. There is now a Wildlife Warden Scheme in Mid Devon, and we are sharing our knowledge with groups in North Devon, the South Hams and West Devon. I am excited to see how these new schemes help wildlife across the county! 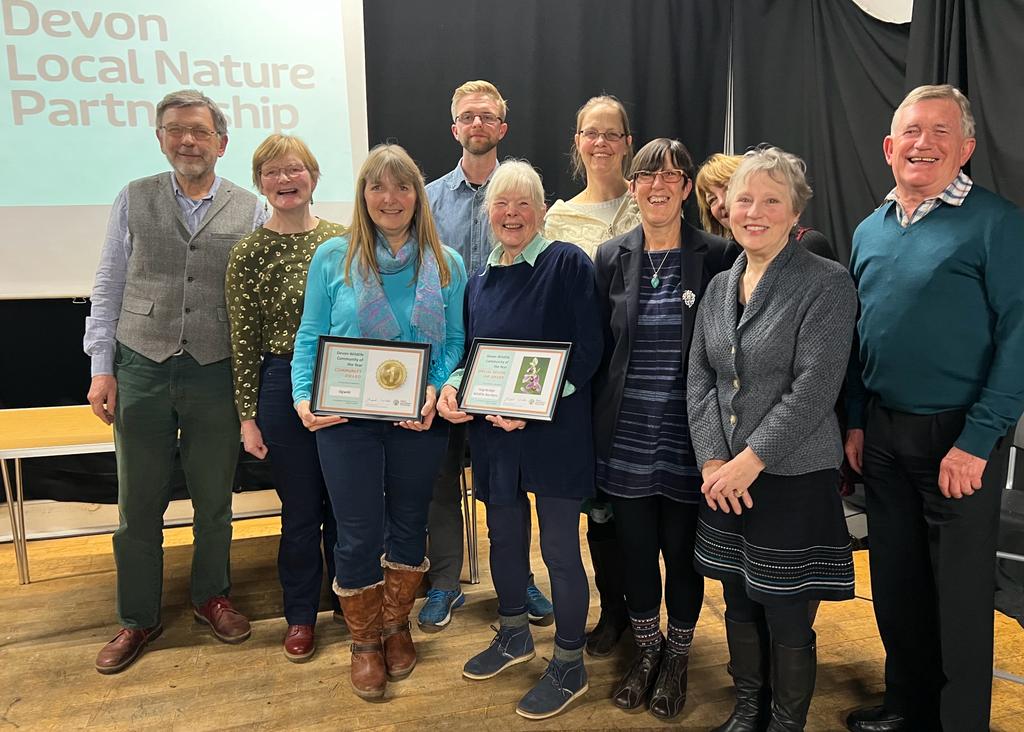 Looking for a new coordinator
I (Flavio) am leaving my position as the Coordinator of the Teignbridge Wildlife Warden Scheme at the beginning of February, as I have accepted a job as a Seasonal Ranger with Aigas Field Centre in the Highlands. Whilst I am excited about this new chapter in my career, I will very much miss working with all of you. It has been a pleasure to work with you on some of your amazing projects that are helping wildlife in Teignbridge. I will also very much miss working with Audrey, as she is a big inspiration to me!

We will advertise the Coordinator role after Christmas. In the meanwhile, do get in touch with me if you, or someone that you know, are be interested in applying! 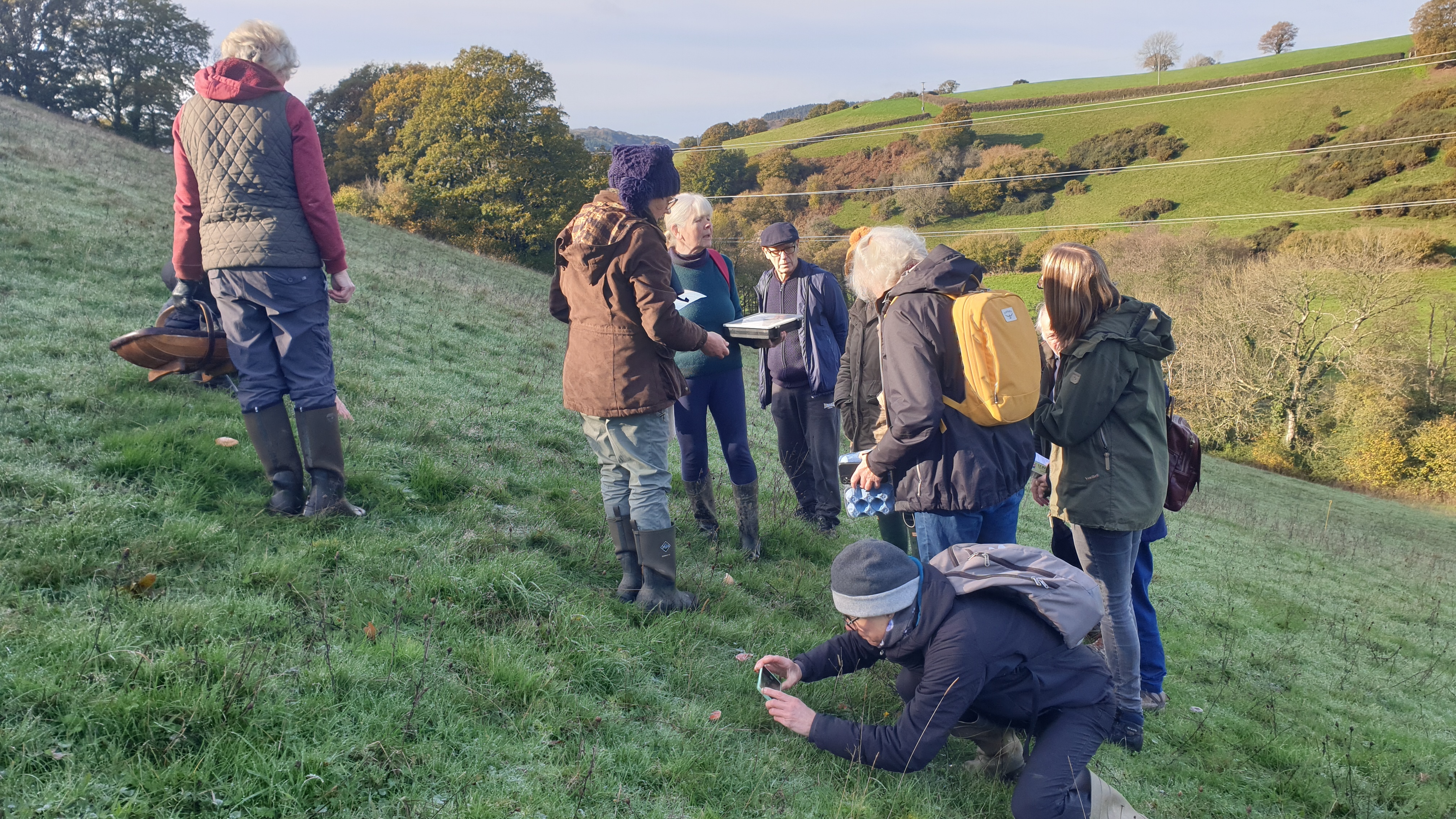 Fantastic fungi finds!
The world of fungi is mysterious and fascinating! Over the last 3 months there have been several fungi surprises in Teignbridge, which is cause for excitement! Here are a few.

The bottom photo shows Audrey Compton with some rare hazel gloves. This specimen was found by Anna Leatherdale in Audrey’s Blackley Wood. Anna wrote this very interesting article about it. It is an intriguing fungi with very specific habitat requirements and is an indicator of good air quality!

Sheree Sedgbeer shared the top photo, which is of a wrinkled peach. It was found not far from Audrey’s farm, is on the global fungi red list, and may be the first ever record in the South West! They are most commonly found on dead elms, which are becoming uncommon due to Dutch Elm disease.

We held a couple of waxcap walks at Deer Park Farm for Wildlife Wardens in November. We were thrilled to find orange waxcaps (middle left), which previously had never been recorded at the farm. The farm now has a total of 19 waxcap species. A site needs 18 species to be of national importance for waxcaps. This is just one reason why Deer Park Farm is such as special place!

Shira Rub found this rare octopus stinkhorn (middle right), which smells of rotting meat (yuck!). Flying insects are attracted by the smell and unknowingly help the fungus to spread its spores.

COP 15
World leaders met this month to discuss how they will ensure the survival of species on this planet. This was the 15th UN Convention on Biological Diversity, and was much less publicised than COP 27, which was the UN Convention on Climate Change. Leaders reached an agreement (although, it seems that China forced this through by ignoring an objection from the Democratic Republic of Congo). The deal included a target to protect 30% of ecosystems by 2030. Other main points include more protection for indigenous groups, and providing more money towards protecting biodiversity. Previous targets from COP10 haven’t been met, so lets hope that COP15 is taken more seriously! You can read more about it here.

Local Plan
TDCs revised Local Plan was meant to be out for a final consultation earlier this month. However, Michael Gove wrote a statement, which outlined changes to the planning system. This means that TDC’s consultation has been delayed by several weeks. We will let all WWs know when it is out for consultation.

Teignbridge Lottery
You can now raise money for ACT by buying a Teignbridge Lottery for Communities ticket! 50% (50p) of every ticket that you buy goes to ACT if you choose us as your chosen charity. Money raised will go towards our Carbon Cutters Scheme and Wildlife Warden Scheme. Many thanks to anyone who has already bought a ticket!

Current projects
Here is an overview of some of the wonderful things that you have been up to.

I wish all of you a Merry Christmas and a Happy New Year, and I look forward to seeing many of you at Wildlife Warden events in January!

Many thanks to our funders – Devon Environment Foundation, the Nineveh Trust, Cllr Jackie Hook (DCC Locality Fund), Dartmoor National Park Authority, the Teignbridge Energy Community’s Community Fund and all individual donors. We would also like to thank everyone who has supported our scheme in other ways, as we couldn’t do it without you.

Richard Weaving was at the heart of wildlife conservation in Teignbridge for over 25 years, first as the Teignbridge District Council Ranger at Dawlish Warren and later as TDC's Head of Countryside Management. Richard supported us Rangers when we had 'great ideas' - and one of them was starting a small Wildlife Warden Scheme, through which some of our expert Volunteers could share their knowledge out in the countryside. It was a popular and successful scheme, but budgets and the Ranger team shrank, so after a few years, it had to end... Sadly, around 2006 Richard was diagnosed with a particulalry fast-developing form of Parkinsons Disease, and had to retire early. When he died in 2019, his family donated the collection from his Memorial Service to help our new Teignbridge Wildlife Warden Scheme - a wonderful way to remember his many year's of hard work for wildlife! Written by Audrey Compton, Action on Climate in Teignbridge's Wildlife Warden and Ecology Lead - and a TDC Ranger from 1993-2008)